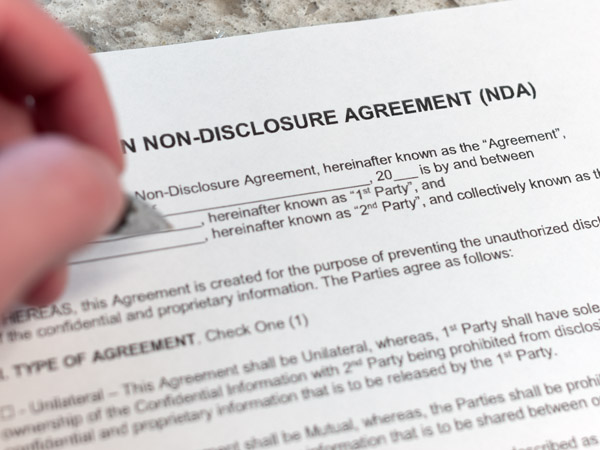 Non-Disclosure Agreements (NDAs) – also known as Confidentiality Agreements – are agreements between two or more parties preventing the disclosure of shared information to third parties. These can be setup as unilateral or bilateral depending on the situation and parties involved.

NDAs are a legally binding contract and the breach of an NDA can result in grounds for a lawsuit for damages. This encourages those with whom information has been disclosed under the NDA to keep said information confidential.

Because of the value of this information and the damages its unauthorized disclosure can cause, it is strongly advised that you consult with an attorney specializing in business law to ensure you are protected with your NDA.

There are several reasons to want an NDA. The most common use of an NDA is for businesses looking to protect trade secrets that if disclosed to an outside party would compromise or damage their businesses. This could cover things such as schematics of a product, internal pricing structures or proprietary manufacturing processes. Below are the most common situations where NDAs are used.

There are several provisions that are generally included when writing an NDA. The first of these is the definition of what the confidential and proprietary information is. This is required because without clearly and specifically defining what information you want to protect, your agreement is not enforceable.

Another provision covered in an NDA is the duration of the agreement. Since it is extremely difficult to enforce a non-disclosure agreement indefinitely, a duration is normally set. This is typically in terms of months or years depending on the circumstances.

The last common provision included in an NDA is the exceptions. Especially in business, there will be situations where disclosure is acceptable. These typically include when the party being informed is already aware of the sensitive information covered under the NDA, or when this information is already known to the public through no breach of the NDA by the recipient.

Below is an example of typical legal language found within this type of document. Also here’s a blank Non-Disclosure Agreement PDF form that’s available for download to give you a better idea of what this contract looks like.

“THIS NON-DISCLOSURE AGREEMENT (the “Agreement”) is made as of [Date] between [Party A] a Michigan limited liability company (the “Disclosing Party”), and [Party B]., a __________________ corporation (together with any other subsidiaries, divisions, operations and affiliates, the “Recipient”).

Q. What are the costs for a lawyer to write an NDA?
This varies depending on the number of parties included in the NDA, the information to be protected and the general complexity of the NDA itself – usually this is determined by the attorney’s hourly rate.

Q. What if an investor will not sign an NDA?
Investors and venture capitalists generally do not sign NDAs due to the sheer number of investments they are exploring. If they were to sign NDAs for all of the companies and entrepreneurs they look to potentially invest in, they would be stuck in an unmanageable web of non-disclosure agreements that would make their work unnecessarily difficult. If you are looking to protect your intellectual property, it is advisable to pursue a patent for your ideas and be careful how much information you expose in your presentations to investors.

At Hoeg Law, we have extensive experience with drafting and reviewing various business contracts including non-disclosure agreements. Whether you’re a business owner looking to establish a confidentiality agreement to protect your intellectual property, or you have concerns about signing one of these contracts, we can help.

Our law firm is dedicated to providing high quality legal expertise to small business owners and entrepreneurs. If you’d like to discuss your legal questions further with an experienced contract law attorney, contact Hoeg Law for a free and confidential consultation.