Mergers and acquisitions (M&A) have been popular business tools since the late 1800s. These transactions involve the consolidation or transfer of the ownership of companies, business organizations or their operating units. From a strategic management perspective, the main purpose of M&As have been to allow enterprises to grow, downsize and/or alter the nature of their business or competitive position in the marketplace.

A well known example of an M&A is the creation of Metro-Goldwyn-Mayer Studios Inc., also known as MGM. In 1924, MGM was formed when Metro Pictures Corp owner Marcus Loew acquired Louis B. Mayer Pictures and Goldwyn Pictures. The total cost for Loew was $8 million or $108 million in today’s money.

Acquisitions, also known as takeovers, are transactions involving the purchase of one company or business by another company or business entity. Sometimes these result in mergers, other times the acquired companies are allowed to keep their own identities. The parent company will almost always be larger, and have complete control over the smaller company that has been purchased. Once acquired by the parent company, the smaller company no longer issues stock.

Acquisitions are normally divided up into two types – friendly and hostile. Because of the negative connotations associated with acquisitions and takeovers (mostly from hostile takeovers), many companies will claim they are in the process of merging with another company, even though it’s an inaccurate term.

Friendly acquisitions are when the acquired company willingly sold their business to the parent company. This situation involves a larger firm purchasing a smaller firm that has made itself available for sale. These types of acquisitions are always preferable, so as to avoid any conflict and potentially negative press and publicity.

Sometimes however, acquisitions are not friendly or desired. Known as hostile takeovers, these are considered to be hostile or even involuntary if the company that is absorbed wasn’t willing to give up their independence. It usually begins with the smaller company declining the purchase offer from the larger company. After this, there are multiple ways for the larger company to effect a hostile takeover.

The most common way a hostile takeover occurs is when the larger company purchases a significant share of the smaller company’s stock. They can then convince the other shareholders to pressure management to go along with the acquisition that was previously declined. If that does not work, the final option is to purchase over 50% of the smaller company’s stock This will allow them to actually force out existing management in order to install new management who will go along with the sale.

Reasons to Pursue an Acquisition
There are multiple reasons for a business to become interested in purchasing another company. Below are the common motivations for an acquisition.

Consolidating – This is when a larger company purchases another smaller company in order to remove their competition from an already over-supplied market.

This method is often more cost-effective than it would be for the larger company to develop them on its own.

Speculating – This is when a larger company buys a smaller company that has developed a new product. The aim is to take advantage of that product’s future growth and profit potential.

Unlike acquisitions, mergers are when two or more existing companies come together to form an entirely new company. Mergers are always friendly, planned and unanimously agreed upon by all participating parties, allowing them to work together as one company. Once a merger is complete, a new company name is given and new stock is issued. There are many reasons why companies would have an interest in mergers. These include:

Something many people are not aware of is that the size of the businesses merging together does not matter. While it’s possible that larger companies choose to merge with smaller ones, sometimes companies of the same size merge as well. This is what’s known as a merger of equals.

Merger Structure
There are several structures for mergers, depending on business needs and requirements. Below are some of the most common.

Conglomeration – This happens when two companies merge that share no common business areas. A good example of this is when PayPal and eBay merged together.

Congeneric Merger – This occurs when two businesses merge who serve the same customer base but in different ways. A good example is when Citigroup merged with Travelers Insurance.

Horizontal Merger – These occur when two companies merge together who were in direct competition. Generally these companies share the same type of products and target markets. A well known example of this merger occurred between the two computer giants HP (Hewlett Packard) and Compaq.

Vertical Merger – These occur when companies who are in the same industry but not in direct competition merge together. Generally this occurs between either a customer and a company or a supplier and a company. A good example is when Time Warner Inc merged with Turner Corporation in 1996.

Market-Extension Merger – These occur when two companies selling the same products but in different markets merge together into one company. A well known example of this merger occurred between Eagle Bancshares Inc and RBC Centura.

Valuing Companies for Mergers and Acquisitions

Before a company can purchase or merge with another company, it’s vital to first understand how much value each company has. The following metrics are used to value companies before a merger or acquisition.

Discounted Cash Flow – Discounted cash flow (DCF) analysis helps determine a company’s current value. This is determined by its estimated future cash flows. The formula for this is as follows: 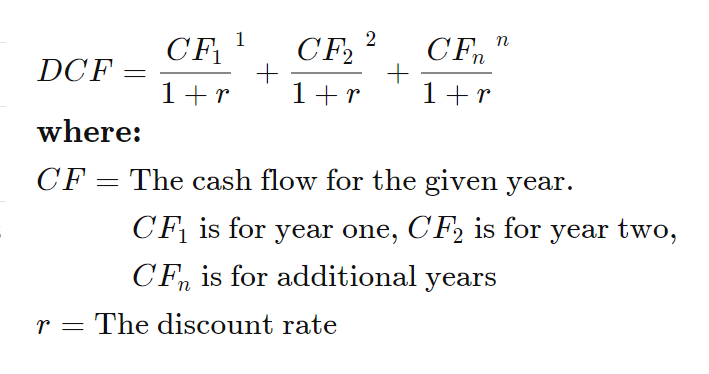 This number is then discounted to a present value using the company’s weighted average costs of capital (WACC).

Replacement Cost – Sometimes takeovers are based on the cost of what it would take to simply replace the company they are interested in purchasing. This is used if a larger company wants to order the smaller company to sell at the price of the value of the sum of its equipment and staffing costs.

Enterprise-Value-to-Sales Ratio (EV/Sales) – EV/Sales ratios are used by the purchasing company to make an offer as a multiple of the revenues. The price-to-sales ratio of other companies within that same industry are taken into account as well.

Price-Earnings (P/E) Ratio – Used by the purchasing company to make an offer that is a multiple of the earnings of the company they want to buy. In order to calculate their offer, the acquiring company would examine the P/E for all stocks within the same industry group. This ratio provides them with a good idea of what the target company’s P/E multiple should be.

Mergers and acquisitions are usually complex transactions that involve significant monetary value and long term effects on a business. Having an experienced business law attorney specializing in mergers and acquisitions is critical to ensure not only that the process goes smoothly, but that the best interests of your company are protected.

Hoeg Law is a business law firm specializing in mergers and acquisitions, with over a decade of experience handling legal issues for some of the largest businesses in the country. Contact us today to get started and ensure your M&A goes smoothly and keeps your business interests protected.